I get directed many questions that have to do with VSCode, and I get it you like it too! There are a few differences in how things are and what you should keep in mind when using this.

The Terminal is NOT a VScode terminal it's a Terminal plain and simple. It's like you open the terminal on your machine. This means if you are on a Mac or Unix system, commands might differ from if you are on Windows.

Now shall we get going... Great 👍 ! So there are a few sections into this. If you are a student at Code Institute and got referred here, then GREAT. 🦺 🙏 Do give me a shoutout if this guide helped you on Slack! 🙏

Let's set up code and install developer dependencies to supercharge your mac.

Homebrew is the lost package manager in mac, and as a developer, it's one of those things you will have to get used to working with. You can mostly install any packages from the terminal So to install it, it's as simple as open your terminal and paste in the code below 👇

Once this is completed, welcome to the world of homebrew. So to install git and python, we can do

Voila simple and easy. (Note that you might see --cask when installing with homebrew. Cask is a flag we use to install it as a program, and not just a tool, Think of a tool as CLI and CASK as an actual GUI app)

Before we begin, there are a few requirements we need, so if you have NOT installed these, please do so before reading.

Please Note: The screenshots etc., here are mostly for Windows users. If you are on Mac or any Linux distro, please follow the guides for the same according to their specs.

So you all done now? 🤣 Or maybe you already had it all installed and was like, "yeah yeah"... Anyways, installing VSCode is quite straightforward.

TLDR - What to choose? 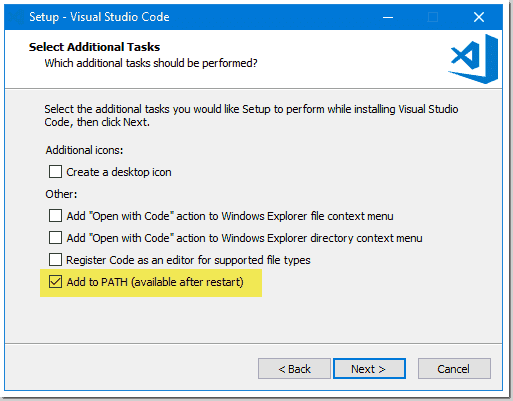 Add all checkboxes The checkbox for the desktop you can pick yourself, but the others will give you a right-click function on files and folders + adding it to the path.

Now that we have installed it let's get into a developer's mindset and how Vscode can help you. If you are coming from Cloud9 / Gitpod, you need to reset your mind on things.

VSCode, in simple terms, is like a notepad with Super Powers 🦸‍♀ , so in the barebone, VSCode is just a text editor, but we can expand on this with plugins or extensions as it's called. Note that this doesn't add things like MySQL** or MongoDB** etc. it adds the ability to read things in a better way, think of it as HTML, give the colours, and report if you have errors in your syntax etc. Now below, I generated up a list of plugins you should have. These are in no particular order, but I will explain briefly what they do in each part.

You can either install them locally on your machine by downloading them or use a cloud service. (If it's wanted, let me know, and I can set up a guide on how to use docker 🐳

The Terminal and you

This is where people get thrown off A LOT, so I'm going to try to explain this as in simple terms as I can. 🤷‍♂️

So in the world of computers, there are loads of terminals. Most UNIX computers (Like Cloud9 / Gitpod / AWS) using ubuntu which is Linux. These machines use Bash, so any BASH command work. Windows is using their Powershell or Command Line aka CMD. Still, you can install git bash, a stripped-down bash version on windows, not really recommended as it can be a pain to set up things. In simple terms, it's not Recommended you want a propper Linux experience either install Linux on dual boot. OR if you really feel tech-savvy, you can use WSL(Requires windows 10). Read more under the WSL section below.

WSL is Windows Subsystem Linux, which gives you a full-blown Linux environment under the hood in windows, great to execute ANY terminal commands on. A quick setup can be found here This means you can now execute commands like in Gitpod / Cloud9 as a pro 👩‍💻 After setting it up and want to use WSL inside VScode, you can use some advanced settings.

This the Windows type equivalent of bash now I say type as it's really not its windows version of a terminal. You can type commands, except that windows found out not all commands should be needed, so think of it as a stripped-down version of bash. When working in windows, this is the simplest thing to use and most recommended. Note that many commands except python git are different, and you might have to google the differences.

It works just like CMD but is more modern. I don't really recommend it as it has some other quirks to it. Feel free to use it, though.

If you are on Windows 10, then this is for you. It's a developer terminal that is quite powerful with some nice customization. It's just a wrapper around all terminals, but you can read more about it here

So to not pollute your machine, a virtual environment is recommended strongly. Think of this as an isolated box per project. So the best thing you can do is create this inside your project.

I would strongly recommend having 1 folder and inside have a folder per project. So when you want to work on a project, open that folder.

Windows: An example would be in a Let's say C:\ for windows users you would have it like this.

This means you can access any project by going to C:\Code\YourProject

Mac note ~ in Unix is the same as the home folder, so for mac, it's /Users/YOURUSERNAME instead of the path that we can say ~

To use a virtual environment, you need first to install it and then activate it.

For this, we can use pipenv, which package we can install Windows

All done👏 now, let's tell PIPENV to use the .venv folder in the project by default.

Note: Press Control X then Y + ENTER to save

Testing it all out

Let's now try to test this out and make a Flask application.

Once installed, it should have populated the .venv folder you have with some files. If not, scroll up and make sure you have set the PIPENV_VENV_IN_PROJECT="enabled" correctly. Make sure you also close the terminal.

Workspace settings are settings per folder or project if you want. You can override global ones or set special ones like the one below to set up a virtualenv.

NOTE: Make sure you reload vscode - Pro tip here is you can press CMD + SHIFT + P (Mac) or CTRL + SHIFT + P on windows. This will open the command palette where you have access to all settings (if it's prefixed with > if it's not, it's all files and fussy searching. 😁 Anyways, type > Reload and find > Developer: Reload Window

All done? 👏 Nice, let's finish off our Flask app. Note: It should say (.venv) at the left side of the terminal, or vscode should have asked you if you want read environmental variables which you should say yes to. If this is not the case, you can enable the virtual environment yourself by executing

Create an app.py file and paste the following content below into it.

And in the terminal, we can now run flask run

Now you should have auto reload on save and a flask server running on port 5000 ready to develop like a pro. 👩‍💻

Now that should be it, and you are ready to code in any language that Code Institute provides, please note that we do have a channel run by students #vscode